Here you have a true "thing with a history". It is the ancestor of contemporary knitted caps. Made from the 16th century model from the Monmouth Museum in Wales.

In the 16-17th century, caps like that were spread all over Europe, and mostly simple sailors and soldiers wore them.

The cap was knitted by hand of sheep’s yarn and washed afterwards, thus the wool became denser.

An eyelet on the back of the head can be used for hanging it. In past ages, it probably served for fastening to clothes or a helmet, too.

The hue of the yarn coloring may insignificantly differ from the one represented on the photo.

Knitted by hand in Moscow. 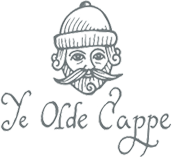