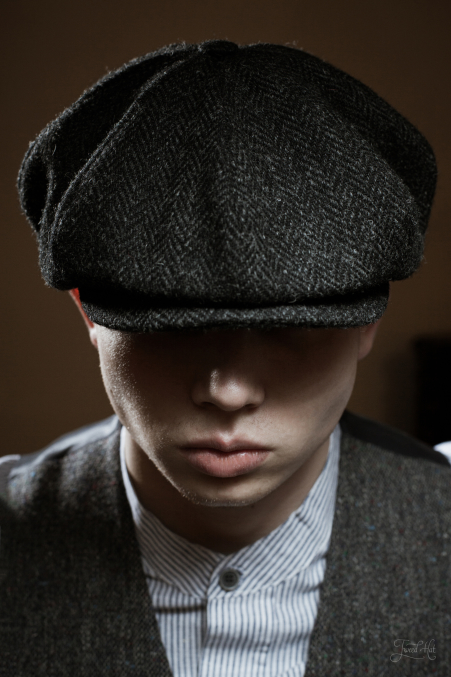 «Peaky Blinders» series (first season of which aired in 2013) tells a story of the Shelby Irish gangster family, their feuds and deals with other gangs of London and Birmingham in the ‘20s of the last century, and their relationship with the state. Series immediately caught audience’s eye with its stunning air of an early 20th century British industrial city, charismatic characters, great acting (starring Cillian Murphy, Paul Andersen, Tom Hardy, Sam Neill, Adrien Brody, Aidan Gillen), and unpredictable and captivating plot by Steven Knight.

One of the most important features of the series is the style of main characters – their immaculate suits look surprisingly modern and at the same time doubtlessly authentic to 1920s. And one most distinctive element of their clothing is a tweed peaky cap – Shelby brothers always wear their baggy tweed eight-piece caps made of dense wool.

Looking at the suit of our protagonist Tommy Shelby we can assume that fabric of his jacket, waistcoat and cap is getting more and more expensive as his fortune grows. In the first season Tommy wears an eight-piece cap made of gray Donegal tweed – a hardwearing and relatively affordable fabric at the time. From the second season on he prefers more sophisticated caps made of exquisite fabric like fine tweed or pin-striped wool resembling flannel. Dark-gray and black Hanna Hats and dark-gray Stetson Hatteras eight-piece caps in our collection resemble these quite closely.

In the first season Arthur Shelby wears tweed eight-piece caps with a large herringbone pattern – quite similar to brown and gray herringbone eight-piece caps by Hanna Hats in our collection. Johny Dogs of the Lee Family, on the other hand, prefers classic vintage flat-caps. We have a good assortment of these in our shop – like this, made of brown Donegal tweed, or this dark blue Harris Tweed.

Most main characters in the series wear cotton and linen shirts with soft band collars, often with detachable collars too. We have traditional Irish shirts in рубашки the early XX-style (sometimes also called ‘grandfather shirts’), produced by an Irish brand Lee Valley Ireland, and classic cotton checkered hunters shirts by Oxford Blue. They are comfy, durable, and perfect for a Peaky Blinders look.

Also an important part of a men’s suit in the series are tweed waistcoats. They are worn by basically all main and secondary characters. Usually these are regular fit dark waistcoats with a satin back (for added comfort when worn with a jacked or a topcoat). We feature tweed men’s waistcoats by Irish brands Hatman of Ireland and Magee 1866. In the first season Tommy Shelby wears a gray Donnegal tweed waistcoat, while Arthur and other characters also sport waistcoats of other colors and patterns like black or herringbone gray.

In the 4th season there is a scene where Aberama Gold speaks to Thomas Shelby in the stable. He smokes a ceramic pipe – they were popular throughout Europe in XVII-XIV centuries and were still used in XX century, although not as often. We can offer you such smoking pipes crafted by traditional technique.

In this section we offer you hats, eight-piece caps, clothing and accessories from the Tweed Had collection which in our opinion are very close to these used by the characters of «Peaky Blinders» both in looks and spirit.